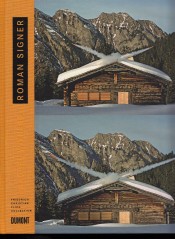 “It is simply, complexly, amongst the best art being made by anyone in the world today.” (Jeremy Millar, ‘Catastrophe Practice’, 2001)

What’s the best way to organise a study of the work of Roman Signer? “Begin at the beginning and end at the end” might seem the commonsensical reply - set out a chronological survey starting with Signer’s earliest works and ending with the most recent. But to adopt such a plan would be to brush aside the complex questions about time that are raised, with beautiful simplicity, by the work itself.  This essay hopes to show how the fabric of Signer’s exceptional practice is shot through with questions of time.

Signer’s works have acquired the label ‘time-sculpture’.  They share traditional sculpture’s concern with the crafting of physical materials in three dimensions, but they extend that concern into what may or may not be characterised as the fourth dimension: the dimension of time. Time-sculpture investigates the transformation of materials through time, focusing the viewer’s attention on the experience of the event, the changes wrought, and the forces involved. Variously combining three-dimensional objects, live action, still photography and moving-image documentation, Signer’s time-sculptures frame episodes of the containment and release of energy - always with ingenuity, often with captivating, epigrammatic swiftness and irresistible humour. In Cap with Rocket (Mütze mit Rakete 1983; cat. 38 and 98), for example, a length of string connects a firework and a knitted hat that Signer has pulled over his head. The firework is ignited; it shoots into the air and whisks the hat away, revealing the artist’s face. In Stool - Kurhaus Weissbad  (Hocker - Kurhaus Weissbad 1992; cat. 56) a small explosion triggers the catapulting of a four-legged stool out of a window; the stool sails through the air and crashes to earth. In Kamor  (Kamor 1986; cat. 47 and 98) a gunpowder explosion at the summit of a small mountain in the Swiss canton of Appenzell produces a burst of flame and a plume of smoke and momentarily lends the summit the appearance of a live volcano. In Attaché Case (Aktenkoffer 1989/2001; cat. 51) a concrete-filled briefcase is taken on a short ride in a fast machine - a helicopter, to be precise. At a height of about a hundred metres it is dropped. Like a meteorite, it plummets into a grassy field and gouges a deep crater in the turf.

Simple! And in some ways, the step from sculpture to time-sculpture is indeed beautifully simple: elementary, to borrow a word the artist himself has often associated with his work. In the face of the striking immediacy and poetic plasticity of Signer’s pieces, critical commentaries can sometimes seem frankly redundant - like a dull-witted, pedantic glossing of a perfectly-timed, beautifully-judged joke. The critic is dogged by the suspicion that (to co-opt a phrase from Simon Critchley) a time-sculpture ‘explained’ might be a time-sculpture misunderstood. From a seemingly restricted palette of processes and materials, Signer generates a poetics whose tones range from the melancholy to the thrilling, from the charming to the violent, from the grave to the frankly, irresistibly silly, and many points north, south, east and west of these affective co-ordinates.

However, from both an art-historical and a philosophical point of view, time-sculpture sets up a complex, elusive proposition. It asks that we reflect on our fundamental assumptions about temporality. It invites us to re-examine our ideas about such things as events, changes, beginnings and endings. This has far-reaching consequences for contemporary Western subjects, inhabitants of a culture which has effectively universalised time. Time “touches every dimension of our being, every object of our attention - including our attention itself.  It permeates simple everyday experience no less than the most abstrusely theoretical speculation… [and] confronts every specialty. Its relevance extends from the strictest computations of mathematical science to the most speculative conjectures of interpretive theory. It is a genuinely transdisciplinary category”. To place presuppositions about time under scrutiny is to unsettle the very foundations of habitual thinking…

This essay continues in

Information and news about Roman Signer’s work is available here