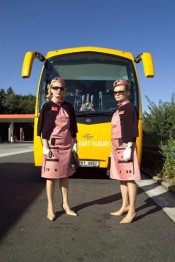 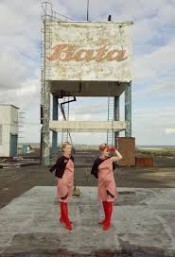 “Work collectively, live individually,” expounded Thomas Bata, founder of the eponymous international shoemaking empire. To that end, he housed his workers in purpose-built, functionalist-style model towns, boasting schools, sports halls, and other facilities. The first of these was founded in Bata’s hometown of Zlin, Czechoslovakia. 1920s Modernist aesthetic notwithstanding, Zlin was much more Pullman, Illinois, than Dessau. Its main architect, Frantisek Gahura, reinterpreted Bata’s idea of “individual living” in somewhat cynical terms. “The man who has… a building with a garden is more stable,” he once wrote, “and instead of following politics would rather potter about in the garden or sit out on the lawn.”

For their project Bata-ville: We are not afraid of the future, 2005, artist duo Pope & Guthrie (Nina Pope and Karen Guthrie) procured a dazzling mustard-yellow bus bearing the Bata-derived slogan of the subtitle and, in 2004, escorted a mixed group, including thirty former employees of Bata’s UK factories (in Maryport, Cumbria, and East Tilbury, Essex) on a pilgrimage to Zlin. In March and April, 2005, their digital video documentary of the project premiered in both English locations. The artists have ambiguously characterized Bata-ville as “a search for the Bata spirit,” maybe referring to the bosses’ vision, maybe to something more nebulous. Predictably, the film reveals both Bata the man and his social experiment to be ambivalent and emotionally invested objects for the firm’s now-aging ex-employees.

En route, a life-size replica bust of Bata Senior—a faintly ludicrous yet overbearing presence—surveys the travelers from beside the bus-driver’s seat. In Zlin, the pilgrims inspect the fabled office-in-an-elevator in which he traveled between floors at his administration building, undetected by his workforce. One ex-worker recalls a factory bathroom with a built-in surveillance window to prevent time-wasting; another hints at the dire consequences awaiting those who stalled the production line. Northerners and southerners mingle cordially, but it’s acknowledged that the Tilburyites enjoyed the lion’s share of Bata “trimmings”—swimming pool, social facilities, and so on. Maryport’s workers had no purpose-built homes and despite their efforts, theirs was the first factory to be wound down. Despite all this, they largely agree it was an exceptional, inspiring place to work. En route home, some are moved to tears by the trip’s revival of the “Bata spirit.”

One traveler describes the dreamlike aura of present-day, semi-derelict East Tilbury contrasted with the thriving community of his memory. The Bata-ville project was largely enabled by public funding for East Tilbury’s regeneration, and superficially it might appear as part of that process’s “trimmings.” However, the project’s participants were all self-selecting individuals who’d responded to the artists’ invitation to apply for a place on the trip, not a targeted group supposedly being “empowered by community art,” and their awareness that they’ve struck a working deal with the artists comes over fairly clearly. (“I feel I’ve fulfilled my contractual obligations” comments one.) The project’s performative basis is underlined by the artists themselves, who sport parodic, early-‘60s-style hostesses’ outfits, and on occasion sternly intone extracts from Bata’s bible How I Began.  Under the Bata system, with its blend of quasi-socialist rhetoric and capitalist-paternalist practice, culture functioned as a lubricant of industrial output.  But (as Guthrie suggests in the documentary’s closing moments) for post-industrial urban renewal schemes such as the one that funded Bata-ville, culture itself – as in service industry activity or recreational consumption – is the “product” to which it’s largely hoped regeneration will give rise. The irony lends a subtle melancholy to Pope and Guthrie’s project.

Pope & Guthrie’s Bata-ville: We are not afraid of the future was screened at East Tilbury Village Hall and the Plaza Cinema, Workington, Cumbria, and premiered at the Edinburgh International Film Festival, in 2005. The documentary can be purchased here.