Patrick Caulfield: Interior with a Picture 1985-6 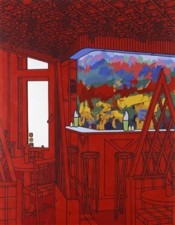 My, how time flies – six years on, and Patrick Caulfield’s up for another retrospective. (The last one was at London’s Serpentine Gallery, in 1992-93.) It’s one of those things a person can rely on, a little like the eternal return of the commodity. (In fact, a lot like it.) The Hayward Gallery is currently stocking fifty-five jazzy, glowing Caulfield desirables, dating from 1961 to 1997, most of them expertly handcrafted in genuine acrylics. The best place to start window-shopping is right in the middle, at the precooked meals section, with exhibit number 28: Unfinished Painting, 1978.

This work sets a place for the viewer and serves up a lavish slice of buttery, golden-yellow, store-bought quiche. Yes, it’s all for you. This central, photorealist passage of the painting hovers above the picture plane like a migraine aura (as opposed to the high-art sort, though the Benjaminian notion hovers around here too). Actually, the label “photorealist” needs qualification: This section of the painting mimics the particular coloration and styling of a ’70s cookbook or recipe leaflet so perfectly that one almost expects to see the words “serving suggestion” lurking nearby. Around this central portion, or behind it, the rest of the dining room spreads out in the simplified, flat-colored planes and hard-edged black outlines that make up Caulfield’s hallmark style. The painting’s edges are fringed with roughly applied white primer and bare canvas, simulating “unfinishedness.” The hand serving the quiche, also primer-white, emerges from the edge, directly connecting the border’s “gestural” brushwork with the gesture of serving up ersatz “home cooking” and, in doing so, insisting on the simulated nature of both pie and painting. The arm of the server is the painter’s arm, and thus the viewing of the painting is conflated with the (simultaneously seductive and sick-making) idea of consuming warmed-over quiche.

How much more bald an assertion of painting’s commodity status can one get? Admittedly, this isn’t the orthodox take: Caulfield’s work is usually read as a jolly but ultimately dignified homage to modernist masters of the still life such as Juan Gris and Cezanne. This particular brand of Pop tends to be viewed as a rearguard gesture, an absorption of mass-market material into fine art to spice up the latter and demonstrate its transformative power. At no point, apparently, should the fact that Caulfield’s work is immersed in the world of the simulated and the commodified – of instant paella and Swiss-style muesli, of rustic finishes, “Scandinavian” interiors, and ’70s wipe-clean vinyl wallpaper – be understood to have a leveling effect on the high-art sources to which he also refers, or on the auratic status of his own work. Caulfield will frequently depict a painting-within-a-painting as just one more item in a given array of consumables, but the scandalous implication here, that fine art and, say, green plastic beakers might share common identity as commercial products, is delicately glossed by his apologists.

Caulfield’s paintings are elegantly composed and skillfully executed. But this does nothing to counteract the faintly claustrophobic feeling or the uncanny charge they convey en masse – indeed, their cool precision is a key ingredient of their low-key menace. His interior scenes – from late-’60s pictures like Window at Night, 1969, to his most recent paintings – are poised on a knife-edge between cozily reassuring and quietly dismal. Interior with a Picture, 1985-86, for example, with its brown-and-yellow flocked wallpaper, its chunky mock-Tudor woodwork, and its treacly, gleefully phony Old Dutch Masterpiece, is like a scene from Blue Velvet relocated to some dark, satanic pub in an English postwar suburb. The space of this painting, like many Caulfield interiors – Paradise Bar, 1974, is another example – holds out a promise of depth (experiential as well as spatial) beneath its insistent surface, while emphatically denying it. Alcohol, frequently featured in his work, is the store-bought opiate par excellence. If everyday products invariably interpellate the shopper, Caulfield’s high-art windows on deserted pubs and wine bars, with their creditcard stickers and Chianti bottles and festoons of plastic grapes, interpellate right back, parading their power to conjure the absent clientele for us high-end (gallery) consumers.

The commodity returns, endlessly fresh and tempting, and endlessly stale and disappointing. Similarly, Caulfield’s pictures charm and excite, repel and dissatisfy; highly consumable, they stick in your throat on the way down. The strength of this body of work is its reflexive efficiency: It precisely locates a specific, limited range of subjects, and treats them so that they reflect and amplify painting’s ambiguous status as pricey fetish. It’s not a unique project, for sure. But (temporarily putting aside the question of the artist’s intentions or the context in which his works are celebrated), in this show, Caulfield’s practice turns out to have sharper teeth than one might expect.