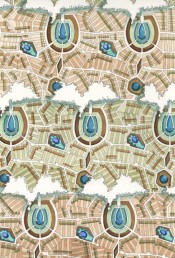 I acquired my subject via a selection process conducted over the phone. I was in London, Andrew was at his desk in Southend. He fanned out the still-available cards: would I prefer one from the right, left or centre? “Left, go left!” I insisted, and the card he picked for me was the Seven of Cups.

It seems this card designates imagination, creativity, fantasy and the search for Utopia. It was an uncanny selection: before I stopped making art in the mid 1990s, Utopia and Utopianism were key preoccupations in my work. Andrew’s selection returned me to the precise point I’d been at when I put my studio activities on hold.

Bruno Taut’s Berlin Britz Hufeisen (‘Horseshoe’) settlement was built in 1925-27 and is maybe the most distinctive of all the progressive social housing projects of the Weimar period. On the map, the Lowise-Reuter-Ring’s ‘horseshoe’ is oriented east-west (as if the horse wearing it was walking westwards). A ninety-degree counter-clockwise rotation neatly converted it into a cup. I reproduced it seven times in a pattern that repeats like a textile design. The outcome seemed to me both to echo the artisanal ideals of the Weimar artists and architects, and to hint at the anxieties about uniformity that haunt perceptions of Utopianism: if this was an actual street plan, it would be a place of nightmarish repetition.

I made the drawing using Rotring drafting pen, gouache and watercolour and strove to keep it from seeming self-consciously conceptual or ‘theoretical’ – in other words, not like something that a writer or theorist would produce. However, the design’s more-than-faintly 1970s character was completely unanticipated. As I made it, it unlocked pungent visual memories from my childhood: in particular, bewitching but unaffordable garments glimpsed when I was eleven, on the couple of sightseeing trips that my mother and I made to ‘Big Biba’ on Kensington High Street in 1974. Of course, many of Biba’s products were pastiches of 1920s and 1930s design: another layer of repetition.

In 1996, just before I stopped making objects and pictures, I toured and photographed many of the German city sites developed by the Weimar architects. Among them was the Taut Hufeisenseidling. Sadly, when I visited, the estate was run-down and depressing: the oval pond at the centre of the horseshoe was not alive with plants and wildlife, but full of scummy, brackish water and rubbish. In 2008, it gained UNESCO World Heritage status; I hope it is in better shape these days.

Outrageous Fortune was on show at Focal Point Gallery, Southend-on-Sea, 4 July to 27 August 2011,before touring nationally.