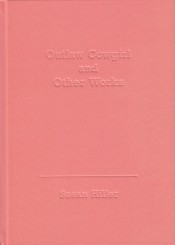 Roll along, roll on

Her eyes are dreamy; her mind is elsewhere, off in the past. She is sitting in an adjustable photographer’s chair, wearing a striped seersucker dress with puffed sleeves and a wide collar. The roundness of her face is emphasised by the dark halo of her upturned hat brim. Her right arm is braced against the chair and her right hand, unexpectedly enough, holds a six-shooter. Her index finger is on the trigger, but she’s not about to fire. The fingers of her left hand are curled around the barrel in a proprietorial gesture. But it’s only a temporary repossession. The sheriff (who, for the benefit of the newspapermen present, ostentatiously checked the gun’s chamber was empty before giving it to her) will have it back in the safe and her off to the cells as soon as he darned well can, once this time-wasting picture business is done with.

The gun’s barrel points downwards towards what (when the photo was taken, a hundred and a bit years ago) would have been the floor. Today however, in Susan Hiller’s work Outlaw Cowgirl (2006), it is loosely trained on a small shelf along which ambles a line of small milk jugs, or “creamers”, in the shape of cows. One has been picked off: its shattered remains lie in a little heap. The pretty lady in the copy of the found photograph has been taking pot-shots at a herd of ceramic cattle rounded up, as like as not, from the far-flung ranges of charity shops, yard sales and flea markets that form just some of the artist’s preferred hunting grounds. There’s been all kinds of rustling going on around here, pardner, that ain’t no lie…

As it rolls along, this essay will explore how thoroughly complicated the Outlaw Cowgirl’s deceptively simple visual joke actually is. Collecting and curating, cultural ownership, borrowing and theft; gender, the domestic and the alien; authorship and poetic language; freedom, law and order; autonomy and identity; concepts of fact and fiction, the visible and the invisible… the sight gag lassoes all these elements (and more besides, no question), looping them into a complex arrangement that resists easy unravelling.

According to Freud’s The Joke and Its Relation to the Unconscious, all jokes are complicated. Overdetermined by the contents of the Unconscious, they form one of the routes by which repressed wishes may become manifest, and their ultimate function is explained in economic terms: they save subjects an expenditure of energy on emotion, Freud supposed. However, his joke-book is bugged by assorted structural problems. Stitching jokes together with individual subjects’ psyches and their personal repressions is tricky, because jokes tend not to be their users’ sole, original inventions. Like rustled cattle, their ownership is up for grabs. And when artists make jokes, extra layers of mediation must be reckoned with. Good artists’ jokes tend to be de- and re-contextualised, self-reflexive, premeditated, strategic. To ask whose unconscious processes they reflect, how they are overdetermined, and how they might “save energy” is to raise large questions concerning constructions of identity and authorship in cultural texts — taxing subjects that are arguably best addressed by paying attention to specific instances. This text will pursue them by scouting the Outlaw Cowgirl’s trail. Who is she? What’s her story? What is her significance within this exhibition? Can she lead us to a stronger characterisation of Hiller’s extensively (and often dauntingly intelligently) theorised practice?