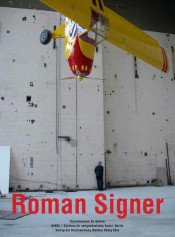 “The imagination is in its essence rebellious against determinacy”

It is not possible to watch Roman Signer’s Super-8 films with half an eye. You can’t follow them while forking up your lunch, slurping mouthfuls of coffee, scribbling notes, looking up contextual information, or chatting with the person sitting next to you. Unlike a good deal of contemporary film and video art (projection-based installation in particular) they are not “ambient”. The individual films are short, ranging from less than a minute to a few minutes in length, and they all have some form of narrative arc: a beginning, a middle and an end. (In some works the end may simply be a consequence of Signer’s spool of Super-8 film reaching its final frame. Nevertheless, it will literally be an end: a positive element of the filmmaking process that requires recognition.) The films are all silent, and the absence of aural information increases the need for careful visual attention. Although the Super-8 films can, and have, been exhibited in the form of a multi-screen installation, you can’t comprehend them by “grazing” from one screen to another and sampling isolated, random fragments of footage. However they are presented, each individual film must be committed to completely, from start to finish.

This is not just because some of the films pivot on super-fast changes and surprise events – precise moments at which (for example) ignition, descent, collision, combustion, explosion, implosion, disappearance or collapse takes place. It is because the films require a deep adjustment of one’s attention across their entire duration: not just an enhanced vigilance, but a special kind of attunement or psychical activation. Watching carefully, one opens oneself up to the moment of the poetic.

Launched out of the blue, that statement risks seeming grandiose and woolly. This essay’s purpose is to explore it theoretically. In the process it will help itself to ideas from a heterogeneous range of sources: both rationalistic, analytical Anglo-American thinkers including Richard Dawkins and Roland Penrose, and Europeans such as Gaston Bachelard, Roland Barthes and, in particular, Cornelius Castoriadis. This methodological roll call looks frankly quixotic, but the justification for it, as will be established presently, resides in the elemental simplicities of Roman Signer’s films. For the final purpose of all this is primarily art-critical. The goal isn’t to generate a definitive philosophical statement about the poetic, but to illuminate Signer’s work, and all the philosophical questions that it opens up. Furthermore, as this essay unfolds, the apparently crisp dividing-line between the “analysts” and the “continentals” will, at least in places, begin to look less well defined…