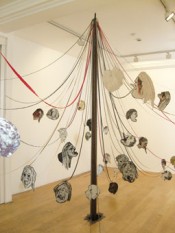 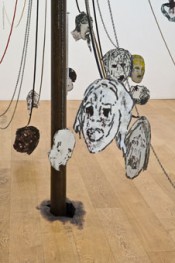 Nancy Spero, the American artist, feminist and leftwing activist, was interviewed in her New York studio a year before her death in 2009. “What can one do as an artist when you see all the violence being carried out in the world?” she asked. In her youth Spero had been a maker of paintings, drawings and prints. Later, as rheumatoid arthritis took over the joints of her hands, print and collage techniques allowed her to create paper friezes and murals, many of them epic in both scale and ambition, and typically featuring a multitude of images of women – from the art of ancient civilisations to the mass-media image-world of the present. In the final decades of her life she experimented with textiles and installation. Prestigious public art commissions came her way: for instance, the lavish, glittering mosaic murals that since 2001 have adorned the subway station under New York’s Lincoln Center. Her pieces varied in mood from lacerating and shocking to playful, comical and celebratory, but for most of her career she grappled with that brutally simple, tortuously difficult question: in the face of so much cruelty and suffering in the world, what are an artist’s ethical and political responsibilities?

Launched at the Centre Pompidou, Paris, last year, the Serpentine Gallery’s exhibition surveys Spero’s career from the late 1950s through to her last piece – a large, idiosyncratic experiment in sculpture made in 2008 – revealing the variety of her responses to the challenge of making politically committed work. Intrinsic to that campaign was her own personal quest for self-expression as a female, and feminist, artist. Paradoxically, she found her solution in a kind of ventriloquism, by recycling pre-existing visual images and others’ writings. In relation to this the remarkable Codex Artaud (1971-72, represented at the Serpentine by about half-a-dozen large pieces) is often cited as Spero’s breakthrough moment.

The Codex is a huge graphic work comprising 37 differently proportioned sections, some of them well over 10ft long. Each is a collage of printed and painted images, plus yards and yards of mechanical type thumped out on an old-fashioned bulletin typewriter, a “big old monster” that Spero hired for the project. Together, its sections form a colossal frieze or scroll that the artist likened to Egyptian papyri. Against the variegated white shades of its paper background, the Codex‘s colours are elegantly restricted and make great use of inks and metallic pigments. Formally, it is rhythmical and choreographic, balancing blocks of text and images against blank areas.

At the time of making the Codex, Spero was involved in feminist activism and protesting against the Vietnam war. She was dealing with ever-worsening arthritis and a generalised feeling of invisibility and voicelessness. Having been fascinated by Artaud for more than a decade, she hi-jacked his prose and made it a vehicle for her own pain and anger. Given Artaud’s well-known misogyny it was an intriguing and ambivalent strategy. Spero summed it up herself via an image that recurs across the Codex – a disembodied head with a grotesque phallic tongue protruding from its mouth: the organ of speech envisaged partly as a weapon and partly as a gag. The language enabling her to speak was also a kind of self-suppression.

However, the Codex Artaud is arguably better seen as a consolidation of Spero’s earlier experiments than a “breakthrough” to a mature method. Lots had already been going on. Between 1966 and 1969 she produced the War Series, a cycle of more than 150 aggressive, satirical, rapid-fire paintings on paper addressing the Vietnam war. This series grafted corporeal, sexualised imagery on to the machinery of war, but like the Codex Artaud it played a perverse game with conventional gender roles. Spero’s guns, bombs and helicopters are polymorphous and perverse: male and female by turns. A “female” helicopter/she-wolf feeds human figures blood from teats dangling from its undercarriage; a “male” bomb distributes death from its two heads and its grotesque armoury of proliferating penises; genderless victims are represented in the form of bloodied rib-bones with screaming faces. Spero explicitly wanted to shock, she said, and to “be obscene, because the war was obscene”.

Looking even further back, the earliest works in the show such as her Lovers paintings (1960) at first glance seem stereotypically painterly and introspective – in lockstep with a dominant 20th-century narrative of painting as private, subjective and in quest of authentic emotion disconnected from politics. But even here in these pieces’ inchoate brushstrokes and inky splotches, borrowed imagery is lurking. Spero’s untitled lithographs from 1956 echo the ancient Egyptian figures that she scrutinised while a student at the Art Institute of Chicago in the 40s, and her Lovers were inspired by Tarot card imagery. Images such as Birth (1960), or Mother and Child (1956), show that right from the start, she was looking for big, even archetypal themes. She wanted to get at corporeal experience from the outside. Even in the 50s, one senses, she was thinking about the public responsibility of making art.

In the ferment of the feminist 80s, the universalising tendency in Spero’s work attracted criticism as well as praise. The global, trans-historical span of her borrowed female imagery led some to accuse her of feminist “essentialism” – of assuming that the possession of biological femaleness trumped women’s local, historical identities and allegiances, bringing all women together in a nice warm bath of female community and mutual understanding. Others accused her of classic western primitivism, arguing that her work grabbed at non-western images (most obviously, that repertoire of ancient Egyptian figures and motifs) to give it a spicily exotic edge. Spero responded by insisting she was not out to universalise the female image but “to show differences in women, women’s rites of passage [and] . . . woman as protagonist”. On the charge of primitivism, the revolution in the global circulation of images in the past two decades has done much to dissolve fixed 1980s concepts of cultural “ownership”.

However, Spero’s work has another danger zone. Various pieces from the later 1970s and 80s include news accounts detailing sexual, sadistic violence against women. Torture of Women (1976), is the best known of these; the Serpentine’s selection has bypassed this, and Marduk (1986) looks to be the sole instance on show. Marduk collages harrowing news reports of female political activists abducted, tortured or “disappeared” in places such as Paraguay, Turkey, and China, and juxtaposes them with an equally violent script: a Sumerian creation myth in which the god Marduk murders and disembowels the goddess Tiamat, splitting her “like a flat fish into two halves” to make “a covering for the heavens”.

What is most disturbing about Spero’s use of this material is the seemingly neutral, dispassionate manner of its display. In a sense, the works are pitiless. She exposes the viewer to the horror, but without any mitigating element of reflection or contextualisation. The tactic is repeated in her curious final work Maypole/Take No Prisoners II (2008). This is a strange, liminal object: a maypole bedecked with slim red and black ribbons and chains from which hang aluminium plaques bearing grisly two-dimensional images of severed heads. Not quite a sculpture and not quite an installation, it’s probably best described as a three-dimensional drawing. Spero labelled the heads “victims”, but they are more likely to inspire revulsion rather than compassion. Again, there is no pity here. In these works, Spero seems to have arrived at a stark answer to her own question: it’s an artist’s task not to rationalise, soften or explain, but to expose and inflict.

Published on the occasion of the exhibition Nancy Spero, Serpentine Gallery, London, March 3 to May 2, 2011