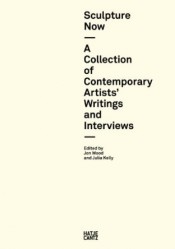 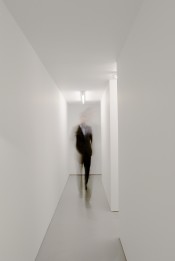 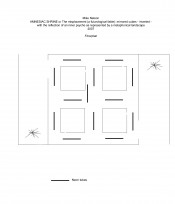 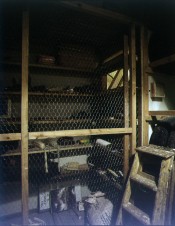 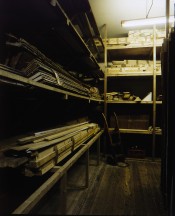 Mike Nelson: The Cosmic Legend of the Uroboros Serpent, 2001

Rachel Withers: In this interview I’d like to pursue the idea of your work as sculpture and sketch some of its connections to the history of what could be called “expanded field” sculpture over the last half-century. You’ve been characterised by some as “a maker of immersive hyperrealist installations”, but I question that description.

Mike Nelson: If I was that, I’d probably just search the internet for photographs, hand them to technicians and have them build an equivalent. Just to begin with, I don’t think of the work I make as “hyperreal”.

RW: The idea of hyper-realist sculpture seems rooted in modernist, mostly painting-derived, discussions about the ontology of art and representation: it turns on a kind of trompe l’oeil at the level of materials. The doughnut looks real, but it’s made out of polyester – that kind of thing.

MN: Right, and that’s not the case in my work, where ultimately all the objects are the things they’re “made out of”. They’re like readymades, to some degree; they certainly aren’t “hyperrealist”, and this defines a difference between my work and some other pieces with which mine are sometimes compared. Some of it I like, but some I don’t … Well, here’s a random example that I remember clearly: an installation where you walked into what was presented as a basement with stone walls, but when you touched the walls the effect was hollow — you could immediately detect fiber glass. You might say that my liking for hardware goes into a kind of myopic detail, but actually I hate that kind of artifice, the sort you’d associate with, say, a cinema set. You get horrible combinations: fake concrete next to real concrete, or a ‘Pozidrive’ screw fixed into what purports to be concrete. When viewers are going to walk through a work, as opposed to watching it on film, the reasoning of that approach is completely flawed. The look and feel is wrong, and a sentimental nostalgia can creep in.

I started off producing sculpture — well, let’s call it installation-stroke-sculpture, the big immersive pieces — as a reaction to the sheer difficulty of making sculpture in an age of video. As video became more prevalent in the later eighties and nineties people became increasingly willing to watch it in galleries for extended periods, but they started bypassing sculpture. Literally: they wouldn’t spend any time with it. So a piece such as ‘The Coral Reef’ worked by making you captive. A: you had to look at it, and B: you could almost lose track of the sense you were looking at art. It allowed viewers to look at singular objects again, to soak up their significance. It responded to a situation where people were walking past sculptures to get to the next video installation. And yet today, things like YouTube and MySpace may well have shortened people’s attention spans in relation to video installation as a medium.

RW: The idea of immersion – in material spaces, and in the fictional scenarios that your pieces propose – is clearly important, but your pieces also have very definite formal and structural properties. They offer visitors a number of levels on which objects may be read. Finally, they allow for both an interior and an exterior view. I suppose my concern is that some commentators get so hung up on the idea of immersive fiction in your work – the idea of “falling down the rabbit hole” into a strange, thrilling, quasi-cinematic parallel world – that they miss, for instance, the phenomenological reading it invites. Or its invocation of histories of later twentieth-century sculpture: sculpture in a condition of self-reinvention.

MN: Well, it sometimes frustrates me that people think of the work either as “hyper-realist” — in other words, something that a good bunch of technicians could build— or as some kind of simple political statement: an object without a formal dimension. Basic formal choices — for instance to do with positioning, with colour — these are important in my working process.

RW: Did you train as a sculptor?

MN: There was no sculpture department at Reading University, where I did my B.A. — they’d closed the department. I worked in what they called the “Third Area”, with tutors such as Bill Culbert, Ron Haselden, Marc Chaimowicz and Richard Wilson. It had a focus on film and installation, but finally, I liked physical, material stuff.

RW: The “Third Area” label says a lot about both the excitement and the anxiety in the categorisation of spatial practices back then. As Rosalind Krauss pointed out in the late 1970s, the word sculpture was used both to “dignify” “third-area”-type spatial experiments, but also to lock them back into an established category.

MN: Well, the labelling issue is tricky. I don’t want to state emphatically “I am a sculptor”, which ends up sounding pompous, yet if I’m asked by people outside the art world what I do, I tend first to say I’m an artist and next that I make sculpture, but sculpture that you walk inside. It’s about objects and stuff, material and form; that’s how I’ve come to it, and finally “installation” feels to me rather a woolly term.

RW: If “pre-modern” sculpture is a relative of the monument, a kind of punctuation mark which “marks a place and articulates its significance” (to quote Krauss again), then the effect of sculpture itself being a place or space, or reproducing an idea of a space, is bound to create confusion. Take the entrance to ‘The Coral Reef’ at the Tate, for instance. It replicates the entrance to the 2000 Matt’s Gallery installation with its shelf and its visitor’s book, and then there’s also a ripped vinyl banquette. Even before you’ve entered the main body of the piece its address is already sliding between environment (what was once a gallery entrance is now a reconstruction of an entrance) and object (interpreting the banquette in narrative terms: speculating about its rough past, let’s say). And this effect becomes still more complex when you take earlier experiments in expanded-field sculpture and the marking of sites, and re-engineer them out of time and out of place. Here of course I’m thinking foremost of your reinvention of Robert Smithson’s ‘Partially Buried Woodshed’ of 1970, in MoMA Oxford in 2004.

MN: That was an interesting work to make, and it did do exactly what you’re saying. You were looking at an absolutely tangible object, this huge pile of sand with its own strongly material identity, and yet Smithson’s work was also present. So there was a constant sliding from a received historical image to something entirely new.

RW: You also happen to have revisited another canonical sculpture from that period: Robert Morris’s ‘Untitled’ (1965) — his mirror boxes, which is referenced in your 2007 Tate Liverpool Turner Prize installation.

MN: Yes, and in fact the 2004 work, ‘Triple Bluff Canyon’, and the 2007 Tate ‘Amnesiac Shrine’ are closely connected. The later piece came out of the making of the Oxford project. The Robert Morris reference arose from that interest in getting distinct images to fade in and out.

When you’re making an exhibition like the one at MoMA you’re at least initially building into a given space on a formal level, trying intuitively to see what might work. But at the same time you have a set of conceptual considerations and you hope that eventually at some level they’ll cross over and make sense of one another. In relation to the final room at MoMA, I kept getting the image of the last scene of Tarkovsky’s film Stalker. I initially imagined some sort of landscape evoking a dune-like scenario, caught inside the architecture of the building, as a formal way of resolving the work.

But alongside this I had a continuing interest in land art, although at that point Smithson wasn’t central; or rather, I was more interested in his reference points and essays than his work. Then I came across a copy of the 1978 Arts Magazine special issue on Smithson with the woodshed on the cover, and in fact it was that objectifying or containing of the work on the magazine cover that reframed it as a possible source. (Later, the magazine cover was reproduced as the MoMA show catalogue cover— another copy of a copy.)

That work’s history— its posthumous politicising in relation to the Vietnam War and the Kent State shootings, and Nancy Holt’s maybe opportunistic claims that the work was about issues underground, being buried and so on — set up connections in my mind with the ongoing Iraq war that had been launched in 2003. Hence the MoMA woodshed’s burial in “the desert” — a sand dune, a moment of realisation in Stalker. The piece felt almost like holding a mirror up at a point in time half way between the past situation and the present, reflecting each image critically onto the other, with sand substituting for earth and Texaco barrels for wood. Then the work became complicated further by layers of ideas and historical and narrative references right across the exhibition, in a manner that paralleled the conspiracy theories of Jordan Maxwell, who featured in a Hotel Palenque-style slide presentation presented as a video in another of the rooms. But standing in the final room, setting aside all the conceptual layers and considering the tangible existence and visual presence of the sand, I felt it was that sliding in and out of focus of historic and present images that worked most strongly…

Read the full text in