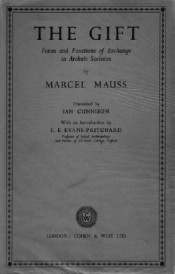 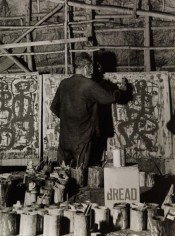 In his book Why Are Artists Poor? The Exceptional Economy of the Arts (2004), artist-economist Hans Abbing explains the financial hardships most artists experience in terms of contradictory spheres. Artists are commonly held to participate in a morally superior “gift sphere” that promotes sharing, generosity, social justice, and respect for nonmonetary values. They also necessarily participate in the market sphere, though to do so profitably most artists largely need to disavow it. Thus artists are forced to reconcile contradictory roles. Selfless gift-givers, they are also gamblers in a punishing winner-take-all system.

Michael Stevenson’s exhibition “Rakit” and the longer-term project of which it is part are at one level an exploration of art’s gift economy. The project centers on a factual episode in the life of the reclusive Scots-born Australian painter Ian Fairweather. An extreme example of the artist as anti-materialist “primitive,” Fairweather nevertheless won considerable fame and had work collected by the Tate. In 1952, in what may have been an attempt to reach London to see his work on display, he improvised a raft from scrap: wood, rope, parachute fabric, and fuel tanks jettisoned by Japanese fighter planes. Equipped with a vintage compass, information gleaned from public libraries, and an excess of confidence possibly inspired by Thor Heyerdahl’s Kon-Tiki experiment, he set sail from Darwin. Sixteen days later, near starvation, he was cast ashore on the island of Roti, where he was taken in by local villagers and given food and shelter. Having saved Fairweather’s life, Roti’s inhabitants judged his raft a gift commensurate with the service they’d rendered and took it to bits. Later he was imprisoned by the Indonesian police and eventually, in a delightful irony, repatriated to the United Kingdom, where he discharged the debt for his passage by further non-monetary means: digging ditches in Devon.

The exhibition Rakit unfurled this seductively bizarre tale via a series of exhibits (all fabricated by Stevenson and his collaborators) that included maps painted on canvas, a vitrine stocked with relics, and a splendidly ramshackle yet functioning reconstruction of Fairweather’s raft (“rakit” in Indonesian). However, Stevenson’s overall project does more than stitch together the tale of an eccentric artist and absentee from the monetary sphere and his interaction with the Western Pacific’s indigenous gift economy: it also trails present-day gifts and donations of labor in its wake. In Whitstable, Kent, in 2004, the Sea Scouts helped Stevenson launch and (unsuccessfully) try to sail his raft to the Isle of Sheppey. (Writer Jeremy Millar made a beautiful video of the event; Alice Maude-Roxby took photographs.) The project was acquired by the German group of collectors Twodo, and later this year in Aachen they will officially receive and break up the raft, using an imposingly cumbersome ceremonial saw (also shown at the Herbert Read Gallery). The Sea Scouts have received embroidered badges. Reviewers have been rewarded with hand-printed replicas of a 1952 Times article about Fairweather’s exploits.

The exhibition’s vitrine contained a copy of Marcel Mauss’s anthropological study The Gift: The Form and Reason for Exchange in Archaic Societies (1924). Mauss was undecided about the historical status of gift economies, at times figuring them as evolutionary leftovers, at others as permanent features of all societies. Later theorists (Abbing included) tend to assume the persistence of gift systems in even the most “advanced” economies. Stevenson’s abiding interest lies both in art’s economies and their historicization, and “Rakit” goes beyond the documentation of art’s “archaic” economics by engaging gifting as an overt, strategic practice. However, Stevenson avoids romanticizing the gift sphere as a “finer” or more moral economic arena; in tone, his recounting of Fairweather’s odyssey is distinctly sharp-edged.