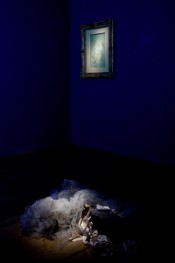 What’s the real object of curator Todd Levin’s exhibition “Joseph Cornell Karen Kilimnik”? There are no surprises at the level of individual works; the Cornell boxes and collages typify the artist’s later, sparer, post-1940s style, while almost all the Kilimniks (from 1989 to the present) are familiar from a flurry of solo shows around the world over the past decade. And Levin’s installation – gallery walls painted ultramarine, velvet trimmings, lashings of glitter, all looking way slicker in reproduction than in actuality – is classic Kilimnik too.

Some London reviewers have been busy with the idea that this is a study of the two artists’ fixation on Romantic ballet – its characters, stars, and scenarios. Well, OK, that’s the subject matter of many of the works. The exhibits include Cornell’s late-’50s collage Hommage to the Romantic Ballet (Fanny Cerrito, 1817-1907) – a sculpted cherub presiding over a baroque skyscape – and a box, via Parmigianino (Villa Allegra), 1956, dedicated to ballerina Allegra Kent. There are two teasingly hapless transcriptions of Degas dance scenes painted by Kilimnik in water-soluble oils, plus her 1993 assemblage Paris Opera Rats (a clump of grubby tulle, a gaggle of satin pointe shoes, a “foam faux rock,” and two yucky plastic mice). Elsewhere is a late-1870s Degas sketch of dancers’ feet, and two vitrines showcasing ephemera from sources such as the Royal Ballet School: Cornell-designed copies of the journal Dance Index, antique prints of Marie Taglioni and her clan, Margot Fonteyn’s paste tiara from a 1956 production of Frederick Ashton’s La Péri. But the show isn’t really about ballet, any more than Kilimnik’s Chic Robins Egg Nest, 2005 (a wreath of twigs adorned with a sparkly brooch, a bedraggled – sorry, artfully ruched – hair ribbon, and a clutch of electric blue plastic Kinder eggs), is about avian reproduction.

Instead, by aligning Cornell with Kilimnik and her particular take on the “slacker” sensibility, Levin nuances the dominant interpretation of both artists. Put crudely, current critical narratives ask that to be valued, Cornell’s practice be construed as symptomatic, Kilimnik’s as strategically iconoclastic. If Cornell’s boxes are not explainable as pathological formations around lost objects of desire (reliquaries “where the subject haunts its desire like a ghost,” suggests Hal Foster in Art Since 1900 [2005]), they are dismissible as “agreeable knickknacks”: nostalgic, sentimental, twee. Conversely, Kilimnik’s work scores on the basis of its supposed quasi-Warholian archness. (“I like the colder regions of thought and feeling. . . . My sloth is a pose,” Wayne Koestenbaum once had Kilimnik saying in an imagined conversation between her and Brigitte Bardot.) Evacuating campy tatters from a dressing-up box of obsolete European culture, it knowingly tacks extra frills of scare quotes onto the inverted commas already in place.

But “Cornell as slacker” cuts a different figure, one also hinted at in a 2003 article by Adam Gopnik. Cornell’s recherches, he suggested, weren’t into temps perdus but temps actuels: “He didn’t long to go to France; he longed to build memorials to the feeling of wanting to go to France while riding the Third Avenue El. He preferred the ticket to the trip, the postcard to the place.” Likewise, Kilimnik’s work relishes substitutes and vague approximations not to gesture archly toward the old rubrics of high versus low or the simulated versus the real, but to explore the capaciousness and adaptability of the stuff packed into the cultural landfill site we inhabit right now. Already a mulch of sublimity and kitsch, ballet makes perfect raw material for these two. Kilimnik’s Kinder eggs morph from overpackaged commodities to preteen treasures to trash to fodder for rich art collectors while somehow retaining the particularity of each stage of their development. Degas’s drawing is reinterpretable as a virtuoso invocation of baggy cotton tights. All this plays a complex, important, often witty (and never univocally satiric or backward-looking) game with questions of cultural value.