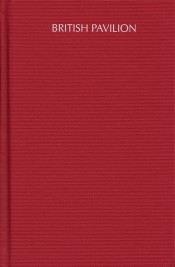 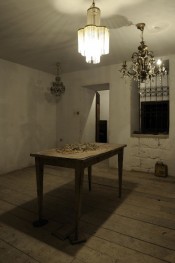 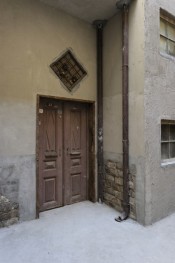 Mike Nelson/April 2011: Right now, I’m thinking about the fact that the British Pavilion’s architecture is still strongly discernible and I’m wondering to what extent it will be possible to make it disappear. It’s to do with the scale of the space, and these huge walls and doorways. It’s proving hard to get rid of, the pavilion. But I’ll deal with that.

Rachel Withers: Below is your earlier self of February 2011, reflecting on that same theme. Plus, Mike, I should warn you that he’s not alone. I took the liberty of inviting a number of ‘earlier Mike Nelsons’ to take part in our discussion. Along with the other guests. Just so you know.

MN/February 2011: Initially my focus was on changing the building’s exterior. A first idea for this Biennale commission was to turn the pavilion into a tyre store. It would have been an absurd monument to circularity. The interior would have featured video projections of footage of a whole host of conspiracy theorists. Using convex mirrors, the video images would have been enlarged and distorted across the pavilion walls. The conspiracy theorists’ conversations would have cross-referenced one other, undermining the possibility of believing in any of the stories or the speakers, and inducing a sense of paranoia.

RW: A tyre store located in a city that famously has no roads would be brilliantly incongruous – but maybe just too humorous, too absurd?

MN/February 2011: It’s a work I’d still like to make, but in a place where its relation to the real world is more ambiguous. I dropped the idea early on because I realised that a blanket transformation of the British Pavilion exterior would only amplify the Giardini’s theme-park-ish, fairground aspect. The idea just made me wince.

Plus I’d started thinking about the complex relationship between Venice and Istanbul. Both places have been important for my work and for me personally. I was considering turning the pavilion into a bathhouse: the symmetry of the building lent itself to the idea. And that led to ideas of a design involving doubling and mirroring: dividing the large, main space into two with a mezzanine; replicating the same elements above and below; constructing side spaces that mirrored one another and met at the back of the building. That formal device would have related to my 2009 installation Kristus och Judas: a structural conceit (a performance in three parts), at the Statens Museum for Kunst in Copenhagen. Kristus och Judas was a very extensive construction featuring two ‘wings’ that exactly mirrored one another.

RW: Which must have been physically, perceptually, quite disorientating. A two-headed building: an architectural kind of amphisbaena…

Jorge Luis Borges: Amphisbaena, in Greek, means ‘goes both ways’. In the Antilles and in certain parts of America, the name is given to a reptile commonly known as the doble andadora (Both ways goer), the ‘two-headed snake’… It is said that… if it is chopped in half, its two parts will join again.

RW: Yup. That’s the one. Disturbing.

MN/April 2009: The mirroring effect was strange, you’re right. Like two symbiotic spaces; the one can’t exist without the other. When you discovered the reversal, the space just felt wrong, somehow. However…

MN/April 2011: …here in Venice, I’ve decided to work against the symmetry of the pavilion, not with it. Doubling, mirroring – they seemed potentially trite so I’ve avoided that option. What I’m doing now is building a biennial inside another biennial. I’m reinstalling my 2003 Istanbul Biennale piece Magazin: Büyük Valide Han inside the British Pavilion: that is, not just reconstructing the Istanbul installation, but also re-crafting the pavilion’s interior to resemble the Istanbul location.

I’ve not been required to supply plans for this installation in advance. That’s quite different from my normal working practice (even though I’d normally modify my plans in the course of a build). But despite the complications, I was keen to go with a less structured approach, because of the nature of the project. The Büyük Valide Han is a 17th-century urban caravanserai in the Mercan area of the city. In its day it must have been beautiful, palatial. Today, it’s a half-occupied, dilapidated warren of former artisans’ workshops. It’s a vast, confused amalgam of different architectural parts, a partial ruin that’s continually being built back into, in a piecemeal fashion.

Fulya Öslem: The Büyük Valide Han’s dizzying effect [is exceptional.]… As with most city hans, but maybe to a greater extent… [it has] a multilayered, complex and even ‘filthy’character. Different layers exist together; the Byzantine tower and other parts are woven together in the building as if it were a montage. The pre-existing mosque… has been replaced by a contemporary masjid, and another small building stands close to it. Various, mind-blurring materials are side by side and on top of each other. This chaotic hybrid picture reveals the intricacies of the life and history of the building and the hectic character of [its inhabitants’] lives.

Rachel Withers: It sounds extraordinary, and difficult to realise, within the particular terms of your practice. By that, I mean your insistence that the materials you use stand for themselves, and don’t simulate other things.

MN/April 2011: In the pavilion, though, I’m building an even more confused amalgam of spaces and details. Not a replica but a reconstruction of my sense of the han and the making of my 2003 piece. In Istanbul in 2003, I took over two rooms in the han and transformed them into an abandoned darkroom: the apparent workplace of an absent, obsessive photographer. The lighting came from red Perspex-covered windows and darkroom safe-lights and there were hundreds of monochrome photographs suspended from drying lines on the ceiling and littering the work surfaces. They showed both the han and the darkroom itself. Quite a minimal strategy, but it had the effect of sucking the surroundings inside the installation, drawing the outside in.

All that’s left are the photographs, and the only thing I knew at the start of the Venice installation was that I’d use them to rebuild the work, creating spaces based on my memory of the rooms. The darkroom I’ll reconstruct, accurately (but split into two halves, located in different parts of the pavilion). And I’ll use the photos to rebuild the rest around it. Inaccurately. If that makes sense. So to keep to a specific plan would be too prescriptive – and dull, somehow. This approach is posing its own problems but it’s more organic, more interesting.

RW: This 2011 work – characteristically – hinges on recycling a past project of your own, in a way that I’m tempted to describe as autophagic, or self-cannibalistic. Autophagy proves to be a fascinatingly elastic construct. It stretches from entirely normal, indeed inevitable, biological processes (such as the self-degradation of living cells), via some pretty dreadful-sounding psychopathologies, to the realms of metaphor and mythic imagery. The tail-biting serpent Uroboros represents the autophagic or self-reflexive principle.

Maggie Kilgour: The Uroboros is traditionally associated with antithetical meanings and is used to refer to both time and eternity… Extremes meet in this figure, which provides another emblem for the transcendence of alienation and the recreation of an original state of wholeness.

RW: Yes, and as a metaphor autophagy raises some teasing questions. For instance: at what point does self-consumption become cannibalism: the consumption of the other? I guess that depends on where you draw the boundaries between the self and the other. And how can something that’s whole, transcendent, also be self-reflexive;  that is, self-referencing or self-critical — activities that one would associate with a kind of mental splitting? This seems to issue in some large philosophical problems.

There are also the questions that surround the near-pervasive requirement, in contemporary ‘deconstructive’ art, for artists’ practices to display a kind of critical ‘autophagy’. All too often those self-reflexive operations seem tokenistic. Others seem substantial, persuasive; but it can be really difficult to articulate why one project falters while another convinces…