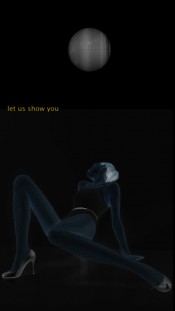 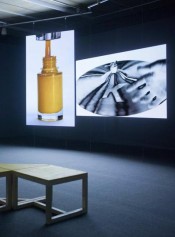 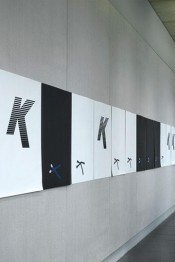 Rosalind Krauss’s 1976 essay “Video: The Aesthetics of Narcissism” identified various tactics by which the then nascent art form might distance itself from the dislocating, dehistoricizing products of mainstream TV. Number one was to “exploit the medium in order to criticize it from within”. That’s a neat-sounding formula, but it translates into an exasperatingly slippery critical criterion. Like beauty, critique (or its absence) proves to be a matter of perception. Yet when the perception hits, it can hit very hard. Elizabeth Price’s two-channel, two-screen video installation Sunlight, 2013—the main element in her recent exhibition of the same name and the first of a planned series of three videos—­is a case in point.

Sunlight speaks the language Price first revealed in her 2007 video At the House of Mr X: a sophisticated, McLuhanesque idiom that digitally processes texts and images in the style of high-end 1960s and ’70s graphic design. Various images represent combustion while sparking into phallic metaphors: Solar flares eject plasma into space, or—a tiny detail sneaked into the corner of one screen—the silhouette of a burning match curls into a diminutive erection. Also featured are striking pictures of sleek female fashion models taken from the packaging for a well-known luxury hosiery brand. Posed in ways that would have gratified the David Hemmings character in Antonioni’s Blow-Up, they knot themselves into stylish tangles of foreshortened limbs and shield their faces as if in self-defence.

Meanwhile, running continuously atop one screen, is an animated image of the sun, assembled by Price from an archive of solar photographs at the Rutherford Appleton Laboratory (the UK research center where Price has been artist-in-residence). Scrolling texts advise viewers that the images are “photographed in ‘K’ light,” a light of “high temperature.” Here “K” presumably refers to Kelvin, the unit of thermal measurement, but Price’s presentation makes the scientific label seem like a brand name, and she strategically muddles it with another “K” brand, the Zildjian K Custom Dark Crash cymbal—the weapon of choice, it seems, for drummers internationally. We see the cymbal onscreen and hear it on the sound track, which builds from a skeleton of percussive effects and finger-clicks to a rapturous, swooping aural climax: Crystal Gayle’s easy-listening classic “Don’t It Make My Brown Eyes Blue,” but played backwards. The sound of words being inhaled rather than exhaled proves physiologically disturbing, and the image of Gayle and her equally glamorous female chorus links back to the hosiery models. Luxury marketing, mass-media images of female glamour: these visual languages, Price seems to say, are like an extreme fairground ride—a perverse, vertiginous experience blending pleasure and dread. One is reminded of Krauss’s summary of “narcissistic” video as “a kind of weightless fall through … suspended space.”

Price’s previous work has often explicitly explored factual narratives. Her Turner Prize exhibit The Woolworths Choir of 1979, 2012, commemorated ten people killed by fire in a Manchester, UK, store. Taken together, Sunlight’s exhibits also hint at an incendiary tale. The video footage, with its imagery of burning matches, scorching sunlight, contorted bodies, and gasping voices, identifies the models as protagonists in a “bitter” story. Elsewhere in the gallery, we find (among other items) an inked-over five-pound note that resembles a cinder and two paintings reproducing textile designs: one from a silk scarf, the other from a hospital gown. Maybe Sunlight parts two and three will reveal another forgotten tragedy—in which case Price’s project will turn out, once again, to be a memorial as well as a critique of a medium.

Elizabeth Price’s Sunlight was on show at Focal Point Gallery Southend between 30 September and 28 December 2013.