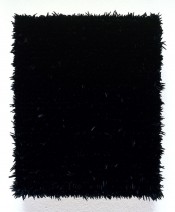 Hands up, all those who find the Ten Commandments irrational, inconsistent, and scary. OK, not killing is an excellent basic principle, but should one’s neighbor happen to have a really superb ass, let’s say, is it so very wrong to covet it? Are the Commandments arranged in order of importance? Surely the eighth, stealing, must be far more grievous than the third, swearing. And what of all those other God-given and thoroughly alarming laws in Exodus (chapters 20 ff.) regulating the stoning of oxen, deflowering of virgins, beating of slaves, and so on? Are these as binding as Commandments, or negotiable? Donald Moffett’s new project, “The Incremental Commandments,” 2000, doesn’t contain explicit references to Old Testament legislation, but, as the show’s press release informs us, the series evolved from the artist’s interest in the Commandments as the “fundamental text of Western law.” It features ten wall-mounted canvases, each sprouting hundreds of tendrils of black oil paint – the shag-pile rug effect that has featured in various Moffett paintings since the mid-’90s. The canvases form a sequence, growing in area by 20 percent each, from a fluffy baby measuring eight by ten inches to a Big Daddy of approximately forty-one by fifty-two inches. (Mathematician Seamus Moran contributed the sums and an attractive if incomprehensible diagram.) Rules spawn more rules across each generation, it’s implied. Apparently graspable at a distance, the “big picture” yields on closer inspection to a bewildering, light-absorbing thicket of crazily tangled details.

That’s the rationalization, but at root Moffett’s fuzzy canvases (unlike the Ten Commandments and Western law in general) are luscious, sensual things, and this installation’s central appeal is its eccentricity, not some relentless application of deconstructive logic. Previous work by Moffett (a founder member of the agitprop group Gran Fury) has combined erotic imagery and political tendency to demand the (responsible) expression and enjoyment of desire as a social right. Exploiting ambiguity and the double entendre, those pieces suborned phrases with religious or legal connotations – “I am judge and jury here” or “Mercy mercy mercy,” for example – to serve as fragments of a gay lover’s discourse. Likewise, “The Incremental Commandments” far more vividly embody the wayward laws of desire and fascination than the attraction of systems of rules, and the shag-pile paintings are positively pornographic in their capacity to generate tactile curiosity via the visual field; “priere de toucher” is the key commandment here. Read as bushy hair or fur, they promise to be invitingly soft, warm, and luxuriant. Read as Astroturf, they threaten to be bristly and abrasive. But they are also clearly whipped up from a squishy, semiliquid substance (and still smell of wet oil paint): To touch would be either deliciously or disgustingly messy and destructive. Moffett’s paintings offer a complicated tactile tease on a par with Meret Oppenheim’s fur teacup.

Comfortable chairs were on hand for the contemplation of the paintings, intermittently accompanied by a sound track: organist Dorothy Papadakos improvising on Chic’s disco anthem “Le Freak.” She blasts away in fine style, brewing an aural mix of grandeur and banality that’s irresistible. (To add to the installation’s tally of politicized incongruities, the piece was recorded in the Cathedral of St. John the Divine, apparently a liberal institution that has opened its arms to New York’s gay Episcopalian community.) Rothko’s chapel was never so much fun: Moffett’s paintings and photographs may reference the modernist monochrome and the Minimalist specific object, but the sensibility revealed in this show hinted at Surrealist agendas of desire and liberation.