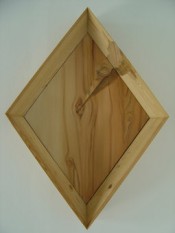 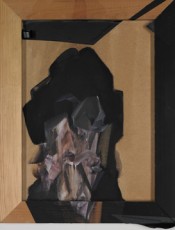 The fact that Vicky Wright’s paintings The Ephemeral Skin and Extraction 1 are both dated 2007 might suggest they are close relations. It’s true that both use similar materials, such as light-toned pinewood, fibreboard and oil paint. Each also shows Wright’s formidable technical skills in action, conjuring up three-dimensional illusions and mimetic surface effects (woodgrain, translucence, fluff, liquidity) in ways that invoke Western trompe l’oeil traditions. They differ slightly in size but both share a portrait-like format, maybe inviting us to peer into them as if into a mirror. When we do, though, strongly contrasting data bounce back.

Wright herself characterises the The Ephemeral Skin as a work that “locks you out”. Its diamond form, she notes, is uncommon even in the man-made landscape and hard to process either perceptually or culturally. The diamond’s aggressive angularity is buttressed by the sharp projections of its wooden frame, and when we probe the image we are rebuffed by a flat, opaque, oil-painted trompe l’oeil wood-grain surface that mimics its knotted pine surround. Like a cancer, this effect creeps onto the frame and, more disquieting still, propagates on its own skin, spawning a fake-on-fake splinter whose grain does not key in to the pattern below. Magritte is nodded towards: specifically, the Magritte who dispensed with Freudian depth in favour of the play of emptied-out sign and surface. The whole packs down into a tight (maybe even academic) experiment in formal strategy and perceptual affect. Here, Wright’s trompe l’oeil stands for itself, in a self-reflexive, hermetic loop.

In Extraction 1, the illusionism slips and slides. The work, Wright suggests, “invites us in”, but to what? Some expressionist scenario, maybe, over which the viewer herself looms, a misshapen shadow marked in light-leeching blackboard paint. A face materialises, but an ambiguous one formed from semi-transparent crystals that melt into fluffy mush and dribbling rivulets. Painterly ambiguities of the third dimension play out as the mesmerising portraiture one sees in nightmares: faces that are at once comical, pathetic and grotesque coalesce then disintegrate. While our relationship to the “sitter” remains unclear, the illusionist dream world of bourgeois portraiture is mapped onto the shape-shifting of the commodity fetish; abject slime morphs into precious crystals and back again. Straggles of cheap black tape, applied so as to breed maximum uncertainty about their aesthetic worth, reinforce the point about value. (Arriving for exhibition in the 2009 John Moores Painting Prize, conservators were worried that the curl of tape in the top left corner indicated damage and needed smoothing flat.) Since 2007 Wright’s experiment with portraiture, illusion and value has expanded into the epic Guardian series, installed in London’s Bloomberg Space in 2010.

So, these works travel from a relatively hermetic formalism to iconographic plurality and ambiguity, showing en route how painterly illusionism carries different valences according to context and application. On one level, then, we might adopt this project as an implicit critique of the last century’s trends in psychoanalytic-deconstructionist criticism: proof of the openness of trompe l’oeil to meanings beyond a binaristic play of presence and absence.

From Deception of the Eye: Special Effects in Contemporary Art