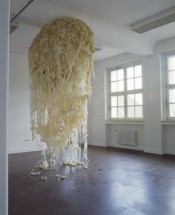 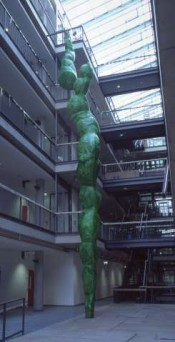 Let there be truth to material, urged Henry Moore back in 1934. “Every material has its own individual qualities”, he stated. Sculptors should “work direct” in an “active relationship” with their media: stone should be left stony, not “falsified to look like soft flesh”. If Moore’s once powerfully influential modernist doctrine is taken as the antithesis of the impulses fuelling trompe l’oeil‘s trickeries and the mirages of special effects, then Gereon Krebber’s work marks the fabled point where opposites meet. His implausible sculptures startle and impress. Equally, they speak to the idea of “truth to materials”; it’s just that their media are very far from those that Moore would have sanctioned. Traditional stuff such as aluminium or plaster does sometimes appear but Krebber is more often testing the “truth” of such stuff as cling film, rubber balloons, porridge oats, gelatine, glycerine, masking tape, sugar, toothpaste, or even post-it notes. “Working direct” in a formidably “active relationship” with these substances, he arrives at sculptural solutions that are unexpected and phenomenologically thrilling but also, in their way, transparent, because his genius is to let his raw materials do what they are good at.

Take his ongoing experiments with cling film, for instance. When wrapped round a support (for instance, clusters of inflated balloons), it takes on a lustrous, icy, metallic sheen and, being light and very cheap, can be worked on an excitingly large scale. There’s no deception there, though: we’ve all blown up balloons, or had that small-scale moment of wonder admiring the reflective qualities of a shiny new roll of plastic film. The surprise is in the pushing of these properties into excess and thereby into new life.

Droopy (2008) tested the combined potential of mayonnaise and masking tape. Applying these materials in industrial quantities to a clump of balloons hanging at roof height, Krebber concocted a vast pale object that rose from floor to ceiling: a kind of cross between a mushroom cloud and a jellyfish, trailing straggles of soggy tape from its underbelly and drizzling grease (the oily sauce softened the tape, partially dissolving its glue). At the time of writing this Krebber is contemplating something similar for Wilhelmshaven, but minus the mayo, which he feels would be “too distressing” for those who’ll have to care for it. Instead he’s seeking some sort of medicinal, ideally clinical-smelling, goo: something with less offensively sulphorous breath.

The organic metaphor is intentional. Krebber’s subtly biomorphic works characteristically have a short lifespan, often deteriorating even during the period of exhibition. Balloons, for instance, shrivel: Droopy earned its name. Beyond either this or their surprise and drama, though, the ultimate “special effect” in Krebber’s works might be their slightly creepy propensity to take on a faint sense of independent life. Reflecting on this, Krebber cites that art-world “elephant in the room”, the idea of the art object’s autonomy. An illusion, he knows: the works are clearly site-specific, art historically referential, and so on. And yet (particularly with pieces such as Droopy) they do project a strange autonomy: they are entities. Spooky phenomena from an alien existential category; one is even tempted to say —here goes — that their eyes seem to follow you around the room…

From Deception of the Eye: Special Effects in Contemporary Art