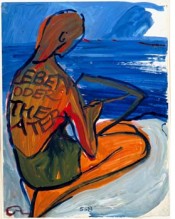 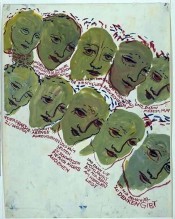 In July 1941, Charlotte Kann, the “strangely twin-natured creature” at the core of Charlotte Salomon’s Life? Or Theatre?, 1940-42,  faces a desperate choice: to commit suicide, or undertake “something wildly eccentric”.

The phrase might be a description of ‘Life? Or Theatre?’ itself:  a “three coloured singespiel” painted between 1940-42 in the South of France, where Salomon, aged 26, was hiding from the Nazis.  (Her attempt at evasion failed; she died in Auschwitz in 1943 at the age of twenty-six.)  Comprising nearly 800 gouaches, written overlays, dialogue and notations for a musical soundtrack, the largely autobiographical work charts the troubled lives of the Kann family circle and Charlotte’s youth in 1930’s Berlin.  Nazi ascendancy is not the only source of horror and pain for the middle-class, assimilated Jewish Kanns. Suicide was a widespread problem for Berlin’s Jewish community; at least eight of Salomon’s relatives killed themselves.  The artist transposes this personal history onto her fictional family; the suicides of Charlotte Kann’s mother, aunt and grandmother form key episodes in the story.

Elliptical, intricate, radically ungraspable, Life? Or Theatre? has suffered from co-optation into what Hal Foster has termed the ‘expressive fallacy’. Unhelpful comparisons with Anne Frank, for example, have construed it as the naive autobiographical outpouring of a soul on the brink.  But the work’s sophisticated recognition of the mediated nature of memory and representation- its proliferation of cultural references, and its strategic blurring of boundaries between what Salomon (as an educated Berliner from a rich cultural and intellectual millieu) might feasibly have understood as psychical and external realities, refute such romantic oversimplification. The work’s final page helps make the point.  An artist, bronzed and glowing, absorbed in her art, kneels beside a dazzling Mediterranean.  The surface of her work has dissolved; representation and life have apparently melted into one another in an ideal union.  However, stamped on her back, an irksome burden that can’t be shrugged off, is the work’s title. The precarious relation of ‘fact’ and ‘fiction’ is a vicissitude to be negotiated painfully; feelings do not spill out, spontaneously, into paintings.

Arguably, it’s the absence of transparency in the social domain that fascinates Salomon.   Her characters are frequently drawn lying in bed- and elsewhere: they lie to their children, their spouses, their lovers, and most of all to themselves. “I’ll go to the United States and become the greatest sculptor [singer, etc] in the world” the Kann circle chatters nervously, in 1938. These are polite, benign lies: euphemisms intended to keep up appearances, further desires, or promote survival.   For her own “protection”, Charlotte Kann has been told that her mother died of the flu, not by her own hand.  It takes the suicide of his own wife to force her grandfather to tell the young Charlotte the truth.  Salomon’s depiction of the confession is remarkable. The grandfather’s monologue weaves around the repeated image of his face.  His expression is static and noncommital, but his gaze shifts defensively about.  What, we wonder, is still being left unsaid?

“You must control your expressions… it’s not necessary for all the world to know what you’re thinking”  Charlotte’s guru and lover, Amadeus Daberlohn, tells her.  Salomon absorbs the suggestion, rendering her protagonists’ faces largely calm and implacable, with eyes often cast down or shut, faintly smiling in situations of the greatest despair. The mask emerges as a key motif: Daberlohn, in one episode, has a death mask of himself made as a kind of spiritual exercise.  While the postures, gestures and interrelationships of the figures further their characterisation, their impassive faces open up complex psychological possibilities. Salomon’s voice was extinguished over fifty years ago, but her characters, even when silent, refuse to keep quiet.