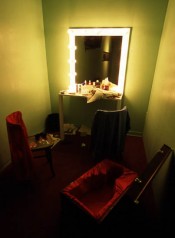 Art critics and cultural theorists looking for a potentially infinitely expandable metaphor might do worse than plump for “ventriloquism.” A quick art-critical trawl through shows that the motif is almost universally adaptable, signaling (among other things, and in no particular order): the death of the author, the artwork in process, problems of free will and determination, the workings of ideology, Cartesian dualism, the failings of Western idealism, cyborg identity, and practically every psychoanalytic model of individual or collective subject formation one might care to dredge up. But as far as art practice goes, just a hardy few have risked invoking ventriloquism directly, among them, Laurie Simmons, Asia Groting (recently shown at London’s Freud Museum), and now Glasgow duo John Beagles and Graham Ramsay, in their installation Dead of Night, 2003.

The show’s star exhibit was a pair of ventriloquists’ dummies, handcrafted by the artists to represent their chubbier-cheeked younger selves. These were showcased in a crimson mock-up of a theater; the two dummies presided over a spotlighted stage, and their voices squeaked and croaked show-time banalities – “Thank you all and God bless” – from a hidden speaker. Backstage, a dressing room with theatrical mirror, toiletries, and a litter of human- and dummy-sized clothing also featured a faux-closed circuit screening of a video of the two po-faced artists and their dummies performing on stage. A third space featured a video shot in the evocatively decrepit Britannia Panopticon Music Hall in Glasgow; this was a montage of campy horror-movie clichés – pans up and down spiral staircases; manic interactions between the artists and the dummies; the dummies, seemingly possessed of independent life, chattering together in deserted auditoriums. Also on show were a number of studio portrait-style photographs, in ostentatiously tasteless gilt frames, of the four protagonists.

Unenthusiastic UK art-critical responses to Dead of Night complained that the installation wasn’t spooky and that the artists had failed to invest their theme with any psychological profundity. Both observations are true, but they miss the point. Beagles & Ramsay’s work frequently foregrounds images of evacuated subjecthood (for example, Ramsay’s hilarious 1996 solo piece Robot Snorkel Parka Prototype, in which a remote-controlled, parka-clad robot “visits” the Macintosh Gallery of the Glasgow School of Art); it also evidences a persistent interest in devalued symbolic currency, critical motifs that have collapsed through over-use (see here their blending of “burger culture” and celebrity worship in the performance Burgerheaven – the True Taste of Stardom, 2001/2002, or We Are the People – Suck on This, 1999, in which Ramsay, clothed and coiffed a la Travis Bickle – hero of art-school undergrad thesis projects the world over – delivered a meaningless two-signature petition to Tony Blair at 10 Downing Street).

In a recently published essay, Beagles and co-author Dave Beech broadsided the tendency of cultural studies to recast the consumption of popular culture as a radical activity. In their view, this is an academic distortion. Beagles & Ramsay’s evacuated tropes might therefore be read as filibustering: Delivering neither a slick, brainy critique nor a dumbly celebratory endorsement, their hollow men survive simply by sticking around (a Baudrillardian tactic, though the artists would probably hate the suggestion). A clue left in the Dead of Night dressing room supports this reading – a copy of Hamlet, lying open at act 3, scene 2. In it, Hamlet is giving those two self-declared mediocrities Rosencrantz and Guildenstern a hard time. The two Danish patsies’ big mistake is to leave the stage, and set off for England. Dead of Night’s double acts refused to fall for that one, even after their audience had departed. “It’s so wonderful to be here! You’ve been a wonderful audience!” the dummies could be overheard cackling – to an empty gallery.