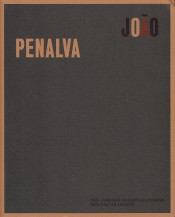 This essay’s task is to discuss João Penalva’s work with text — a seemingly well-defined brief, but the category it proposes has in practice proved multifarious and slippery. For the last two decades Penalva has been making work that explores the uses of language and text. Across that period, he has also produced a sizeable body of pieces featuring only images; yet even in these — and notwithstanding the poise, tension and formal elegance of his images  — unspoken or unwritten words seem to be waiting in the wings. Conceptually and imaginatively speaking, Penalva’s work seems activated by an idea of language even when words are not physically manifest. All of it, one feels, might be thought of as “work with text”, which makes the boundaries of the task here difficult to draw.

There are both generic and particular reasons for this. On the generic side, the expansion of literacy across modern society has grafted images and texts together inextricably; there are no longer any “naked” images. Roland Barthes famously articulated the phenomenon in his 1964 essay, The Rhetoric of the Image. “To find images without words, it is doubtless necessary to go back to partially literate societies, to a sort of pictographic state of the image… [Today] the linguistic message is indeed present in every image: as title, caption, accompanying press article, film dialogue, comic strip balloon”. So one could say simply that Penalva’s work is representative: it fully understands and works within the grain of the condition of the image that Barthes diagnosed.

Furthermore, Penalva has arguably had his way with every one of the types of  “linguistic message” on Barthes’ list. See, for instance, a couple of recent works (neither of which, incidentally, uses text, aside from its title). The 2009 book of images Hello? Are you there? is a photographic montage of  film noir-ish fragments: 1940s and 50s costumes, obscure interiors, Bakelite telephone receivers, hands clutching revolvers. Although wordless, the book is shadowed by the idea of rapid-fire, hard-boiled cinematic dialogue — not specific utterances, but the feeling of the lines, the sense that they are imminent. And in the 2010 colour photograph Betty, drunk. Or Joe Penalva presents an image found on a pavement: a chance configuration of splotches that coalesce into an askew, surprised, cartoon of a human face. Again, there’s no text, but in imagination a vacant speech bubble is not far away.

In fact, Penalva’s multilingual textual explorations considerably extend Barthes’ brief inventory of “linguistic messages”. In video works such as 336 PEK, 1999, or Kitsune, 2001, the artist has reinvented the film subtitle as a medium in its own right, probing its potential in unique ways, for instance by reversing the accepted hierarchy of “original” soundtrack and “secondary” subtitling. In most of his films the written subtitles represent the artist’s original script, his “voice”, while the soundtrack one hears is a subsequent translation.  He has explored the speaking capacity of labels, notices, posters, musical scores, handwritten notes and annotated diagrams, and has even (in the 2001-3 piece Violette Avéry) tested the idea of censored text as a paradoxical means for amplifying rather than blocking communication. More on all of those stories, as they say, later in this text.

Moving from generic reasons to particular ones, the presiding sense of textuality in Penalva’s work might be attributed to the artist’s persistent interest in narrative.  He is a master storyteller and text is indispensable to that activity, no question. But the generation of narrative is not an end in itself. To understand what is really at stake in this retrospective’s curatorial theme we must ask why Penalva needs narrative, what he does with stories — and here the artist’s own account of his first deliberate experiment with text is illuminating. Interviewed by the critic Andrew Renton he describes how, in 1992, after spending two decades exclusively working on painting, he decided to use a passage of handwritten text in a painted diptych. The words were his own but, crucially, the text was handwritten by someone else — a friend or acquaintance, one guesses.

“To see that I was perfectly comfortable with this other handwriting as part of my work opened up … other, completely unexpected new ways of working”, Penalva recounts. The introduction of text introduced not just narrative but also collaboration into the work, and the artist’s underlying motivation became the exploration of communication, mediation and relationship — understood not simply as things that works of culture establish automatically, but as distinct subjects that can be strategically manipulated and reflected on.  With this came the destabilisation and opening up of identity that relationship invites and requires. It licensed Penalva to start creating fictional realms and to layer researched facts, real lives and pre-existing fables with his own invented characters, biographies, places and histories. The new direction challenged him “to be as many minds as I can. All the better if I don’t recognise myself. Better still if you don’t recognise me either.”

And so this essay proposes that Penalva’s use of text ultimately serves an investigation of relationship, understood in a number of senses. His narratives  frequently focus on interpersonal relationships, with a frank concern for their affective dimensions: the tales can be tender, funny, moving, even sentimental; also, at times, disturbing. (The video R, a component of Penalva’s 2001 Venice Biennale installation, includes descriptions of perversely violent traditional “wake games” played by mourners guarding a corpse before burial, and some of the fables of the Japanese “fox spirit” retailed in the hour-long video Kitsune, 2001, are as grim as anything in Grimm.) His pieces’ intertwining of the visual and the textual itself explores a wide variety of formal and semantic relationships. And in practical terms his production processes often entail a variety of collaborations, some requiring a strong measure of trust (for example, between the artist and the translators who collaborate with him on texts in languages he does not himself speak; the 1997 work Addressing the Weeds in Hiroshima is a particular case in point.)  Also at work in this complex relay of relationships is Penalva’s fascination with the interpretation and reinterpretation of cultural artefacts and the mutation of stories as they pass from subject to subject — processes that, once again, he is not afraid to colour with a wide range of emotional values. And all these levels of relationship interact with and reflexively comment on one another. No wonder this mobile critical object proves such a challenge…

Continue reading in: João Penalva: Works with Texts and Images